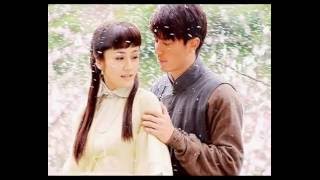 This is the theme song from a 25 Episode Taiwanese TV series in 1984 "Yi Jianmei" ( A Branch of Plum Blossom) starring Koushi Xun, Shen Hairong, Ma Yan Qin, and Julie Pang Xianglin. Fei Yu Qing first sung the theme song in 1982, and then recorded it for the series. It is on his 1983 album 長江水 (The Yangtze River ) LP036 on the Tony label, and has appeared on several compilations since. In 1988, Yi Jianmei became the first Taiwanese TV Series to reach Mainland China and drew very high ratings. The song itself has become one of the most recorded songs ever, but Fei Yu Qing's remains the definitive version.

Yi Jianmei has been released on DVD in both its original Taiwanese form and Mainland China adaptation. It has also been updated as New Yi Jianmei in 2010 starring Wallace Huo as Zhao Shi Jun, Lv Yi as Shen Xi Cin/ Zhao Xiu Jun, Chen Si Cheng as Liang Yong Chang, and Liu Yun as Wan Qiu Long.
Most recently, there was a 2015 update.
The Plum Blossom symbolizes that Spring is near, and shows people how to endure harsh winters and overcome adversity.

Fei Yu-ching – Fei Yu Qing in Mandarin - was born Zhang Yanting in Taipei on 17 July, 1955. He is the younger brother of television personality Chang Fei – host of Variety Big Brother, and who is also a singer who has recorded CDs. At an early age, Fei Yu-ching would sing duets with his older sister Fei Ching Ling. His career began in the late 1970s, and he began to build a large fan base along with his brother. He performed several theme songs for television shows, some of which were more successful than the shows themselves. His Good Night Song, composed by the Taiwanese songwriter Liu Chia-Chang, was chosen by China Television to end each days' broadcast in 1979.

He recorded his debut album, "Beijing Sunset." LS7009 on the Seamount label in 1977, and also became the resident singer of the CTV program "Two for the Road." with his siblings Fee Ching Ling, and Chang Fei hosting it. He switched to the Tony label in 1981 for his 6th album – 變色的長城 – and continued recording 2 or 3 albums each year throughout the 1980s. This was his most prolific period as a recording artist. On March 18, 1984, he finally won Taiwan's "Golden Bell Award for" Best Male Singer, this being his 4th nmination in a row. In 1996 at the 7th Golden Melody Awards, his album Good Night Song won Best Mandarin Album, and he was nominated for Best Mandarin Male Singer.

Over the years, Fei Yu-ching has won many awards, sung in many countries, and has become one of the legends of Chinese music.

English Translation
Lyrics: Wawa / Music: Chen Yi
True love is like the grassland so wide
Unaffected by wind and rain
In due course, the clouds will open and the sun will shine
A thousand sunbeams falling upon us
True love is like plum blossoms blooming
Undaunted by the icy cold snow
At the coldest moment, branches burst into bloom
Spring comes into sight, approaching you and me
Snow petals floating, and the north wind whistling
The world is boundless
A branch of Plum Blossom stands proudly in the snow
Its fragrance lingers for that special person
My love is without complaint or regret
This feeling stays in my heart forever
Repeat previous 6 lines