All About the Renaissance (Full Program) 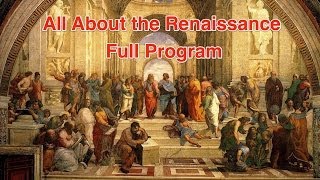 Shout out to all my quarantine learners. Time to put on that face mask OF LEARNING!

This program discusses the Renaissance from several aspects. It begins with the historical background necessary to understand its emergence in the early 1300s. Medieval, classical and Renaissance approaches to art are presented along with the rediscovery of the glories of classical Roman and Greek culture.

The second half of the program focuses on the later developments of the Renaissance. The impact of enormous changes that took place in science, invention, architecture, exploration and religious reform are examined for this pivotal era of world history.

Here are the answers to the quiz questions with a brief explanation:

1. True or False: Copernicus and Galileo believed that Earth was at the center of the universe.
False, they did not believe the earth was the center of the universe. They believed the earth rotated around the sun
2. True or False: Martin Luther wanted to reform Europe's Protestant churches.
False, Martin Luther wanted to reform the Roman Catholic Church
3. True or False: Moveable-type printing was invented in Germany.
True, movable type printing was invented in Germany. However, block printing and paper were invented in China long before.
4. True or False: Stained glass windows were more popular in churches of the Middle Ages than those of the Renaissance.
True, stained glass windows were more common in the Medieval Era than those of the Renaissance
5. True or False: Spain carried out the first major explorations of the world.
False, Portugal carried out the first explorations
Show less