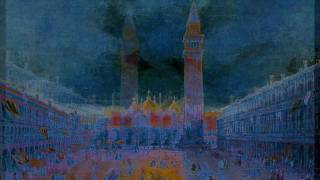 From the Middle Ages, thanks to trading with eastern and southern Mediterranean ports, the intellectual vitality of Arab culture and the artistic fervor of the Byzantine world had an influence on Venetian cultural life. The latter had quite a great impact on the development of Venetian aesthetic ideals: the taste for intense and varied colors, the predilection for gems and precious metals. The concept of Beauty thus combined the magnificence of the architecture and the meticulous attention to detail, which characterized as well the mosaic tradition with its clearly eastern origins.
In Venice, St. Marks Cathedral was the religious center for the Doges, radiating music. Documents from 1316 regarding the Basilica witness the presence of a Mistro Zucchetto, organist and organ builder. At the end of 14th century, there were two organs: the called Organum magnum (by Jacobello, 1374) and the Organum parvum (anonymous Franciscan monk, 1388). In 1490, Brother Urbano built an organ, successfully repaired in 1558 by Vincenzo Colombo under the guidance of Merulo and Padovano. The fame of the performances in St. Marks, were illustrated, among others, by the Maestri di Cappella Adrian Willaert, Cipriano de Rore and Gioseffo Zarlino. During Zarlinos period (1565-1590), the organists Claudio Merulo and Andrea Gabrieli, brought further prestige, continuing the tradition of Marc Antonio Cavazzoni, Jacques Buus, Annibale Padovano and Girolamo Parabosco.

With Andrea Gabrieli (c.1533-1585) Venetian organ music reached one of its zeniths («Toccata del nono tono»). Gabrieli was the second organist in St. Marks for almost twenty years, substituting Merulo at the first organ between 1584 and 1586 when he moved to Parma. Despite the fact that his organ works were published posthumously, the presence of several single pieces in didactic publications of the time, as, for example in the Transilvano of G. Diruta (1593) demonstrates that he was already well known previous to those editions. Author of two books of Ricercari, Gabrieli probed this form with intensity, rigorously following the principals of imitation, elaborating a single subject in its melodic and rhythmic variants, and embellishing the cadences with brief ornaments and diminutions («Ricercare del primo tono»). One other imitative form was the canzone. It has its origins in the practice of transcribing French vocal chansons into keyboard tablature. The canzone was subsequently transformed into a free paraphrase, often keeping the title, canzone alla francese or canzon francese, until it gradually acquired complete independence with respect to the vocal models and took on the title canzone da sonare (chanson to play). «Qui la dira» transcribed by A. Gabrieli respects the vocal model of T. Crequillon to a substantial degree and is embroidered with abundant ornamentation.