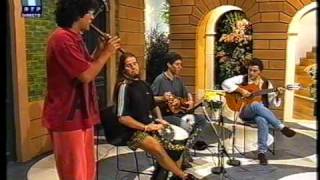 Bailia was the first Portuguese music band that performed traditional European folk music for a dancing audience.
It was founded in 1995 with the original idea of playing music that could be danced by a participative public, who would not only enjoy the sound and performance given by the musicians but would also learn the new steps and be part of the concert itself.
Gathering melodies, songs and dance styles from different parts of Europe, Bailia promoted and disseminated a new approach to music throughout Portugal (especially in the Lisbon area and at the Andancas Festival, north Portugal), delivering lively, animated and intimate performances in numerous crowded concerts/bals.
It was with Bailia that many people came across folk instrumental sounds for the first time. Encouraged by the interception of different music styles (traditional, jazz, classic, Brazilian and African), contemporaneous arrangements and original compositions of the group, they became enthusiastic fans of this new style of performance.
Following a trend already observed in France, Italy, Galicia and Catalunya, Sweden and the United Kingdom, young crowds discovered also the new challenge of group and couple dances. Bailia took the Bourré, Schottische, Mazurka, Waltz, Chapelloise, Jig, Circle Circassiens, An Dro (and other Breton dances), Pingacho, Repasseado, Cirigoça and Polska to new cultural and social fields, opening the way for what would become an energetic and significant manifestation of todays Portuguese music.
This clip was recorded at Praca da Alegria show, in 1997. It shows only four of the original seven members of the band, playing for promoting Bailia's concert at Andancas Festival that summer.. When the group disbanded in 2000 most of its members were to integrate or to start other influential Portuguese bands on European and Portuguese music, taking the repertoire of Bailia with them and making it more widely available.