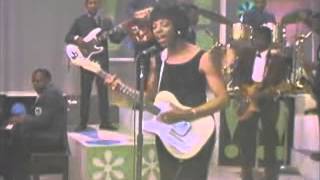 Singer/guitarist Barbara Lynn was a rare commodity during her heyday. Not only was she a female instrumentalist (one of the very first to hit the charts), but she also played left-handed -- quite well at that -- and even wrote some of her own material. Lynn's music often straddled the line between blues and Southern R&B, and since much of her early work -- including the number one R&B hit "You'll Lose a Good Thing" -- was recorded in New Orleans, it bore the sonic imprint of the Crescent City. Lynn was born Barbara Lynn Ozen in Beaumont, TX, on January 16, 1942; she played the piano as a child before switching to guitar, inspired by Elvis Presley. In junior high, Lynn formed her own band, Bobbie Lynn and the Idols; at this point, her musical role models veered between bluesmen (Guitar Slim, Jimmy Reed) and female pop singers (Brenda Lee, Connie Francis). After winning a few talent shows and playing some teen dances, the still-underage Lynn started working the local clubs and juke joints, risking getting kicked out of school if she had been discovered. Singer Joe Barry caught her live act and recommended her to his friend, producer/impresario Huey P. Meaux, aka the Crazy Cajun.

With her parents' consent, Meaux brought Lynn to New Orleans to record at the legendary Cosimo's studio. Lynn cut a few singles for the Jamie label with the understanding that if none hit, she was to attend college instead of pursuing music right off the bat. In 1962, her self-penned ballad "You'll Lose a Good Thing" became a national hit, reaching the pop Top Ten and climbing all the way to number one on the R&B charts. Her first album (of the same name) was also released that year, featuring ten of her originals among its 12 tracks. Lynn continued to record for Jamie up through 1965, producing follow-up R&B hits like "You're Gonna Need Me" and "Oh Baby (We Got a Good Thing Goin')," the latter of which was recorded by the Rolling Stones in 1965. In 1966, Lynn switched over to Meaux's Tribe label and cut "You Left the Water Running," which became something of an R&B standard and was covered by the likes of Otis Redding. In 1967, she signed with Atlantic and had another R&B hit with "This Is the Thanks I Get" early the following year; she also issued another album, Here Is Barbara Lynn, in 1968. Lynn scored one last hit for Atlantic in 1972's "(Until Then) I'll Suffer," but by this point, she had several children to worry about raising; dissatisfied with her promotion anyway, she wound up effectively retiring from the music business for most of the '70s and '80s, though she did play the occasional low-key tour.

Lynn returned to music in the mid-'80s, touring Japan for the first time in 1984; she later cut a live album there, called You Don't Have to Go, which was eventually issued in the States by Ichiban. Lynn had managed to retain a cult following among connoisseurs of American soul and blues in several different pockets of the world, and toured internationally during the early '90s. In 1994, Bullseye Blues issued her first full-fledged studio album in over two decades, So Good; Until Then I'll Suffer followed in 1996. Lynn later caught on with the respected blues label Antone's, and in 2000 she cut Hot Night Tonight, which featured a couple of raps by her son Bachelor Wise. ~ Steve Huey, All Music Guide

PLEASE NOTE: I divided my uploads among multiple channels, Bookmark this link in your browser for instant access to an index with links to all of John1948's oldies classics. LINK: http://john1948.wikifoundry.com/page/John1948%27s+Youtube+Index