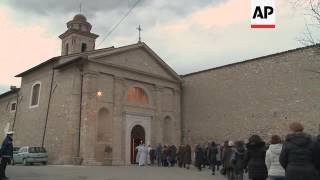 AP Television
Norcia, Italy - 10 February 2016
1. Close of a Nursia beer glass with rose petal design, as beer is poured in
AP Television
Norcia, Italy - 9 February 2016
2. Mid of rose petal window in St. Benedict's Basilica which matches the design on the beer glass
3. Wide of Norcia's main square, with St. Benedict's Basilica and rose petal window
4. Mid of statue of St. Benedict in main square
5. Close of statue of St. Benedict
AP Television
Norcia, Italy - 10 February 2016
6. Wide of refectory inside the Benedictine Monastery in Norcia, as monks eat sitting at long wooden tables
7. Mid of sub prior of the monastery, Father Benedict, as he sips Nursia beer
8. Mid of monks eating
9. SOUNDBITE (English) Father Benedict, Sub prior at the Benedictine Monastery in Norcia:
"There's always the option for an individual monk to give up alcohol, to give up beer, to give up wine, but traditionally beer has been something that monks have drunk more of during Lent because they're fasting. The monks eat only one meal a day, often late in the afternoon, so beer was a way to add sustenance to that meal."
10. Wide of candles in foreground as mass is celebrated inside St. Benedict's Basilica in Norcia
11. Mid of monks and priests at altar during mass
12. Mid of priests making sign of cross on monks' foreheads with ashes, during Ash Wednesday, marking the beginning of Lent for Christians
13. Close of monk receiving ashes on Ash Wednesday
14. Pan left of monks pouring and drinking their Nursia beer, inside monastery parlour
15. Close of monks toasting with Nursia beer and Nursia beer glasses
16. Mid of monks sipping Nursia beer
17. SOUNDBITE (English) Father Benedict, Sub prior at the Benedictine Monastery in Norcia:
"So many people are afraid of going to church, afraid of talking about God, afraid of things that have to do with religion. But they're so much more easy, when talking about beer. So for us it's a way to open a door; a door that maybe they've never wanted open before. Then naturally from a material point of view, this also helps us restore our monastery. We have ancient buildings here. The crypt comes from the 1st century. We have 14th century walls around the whole property and all of them need constant maintenance, constant support, so it also enables us to keep the building not just in shape, but also beautify it, make it into something really beautiful to glorify God."
18. Mid of chalices full of Nursia beer, as hand pours dark beer into chalice
19. Wide of Benedictine monks guiding a procession in Norcia with town residents
20. Wide of procession of monks and residents entering church in Norcia
21. Pan right to monk, Brother Augustine, emptying sack of grains into grinder to begin brewing
22. Close of grains being sucked into grinder
23. Wide of Nursia brewery, as brew master monk Brother Francis pours grains into brew mash
24. Close of Brother Francis mixing mash in large containers
25. SOUNDBITE (English) Brother Francis, Nursia Beer brew master at Benedictine Monastery in Norcia (left):
"We looked at making a blonde and a Belgian strong dark, which are kind of the symbols of monastic brewing, so we decided on that style, because it's well known, it's representing monastic beers, they're pretty traditional, and I personally like that type of beer."
Brother Augustine, Brewer at Benedictine Monastery in Norcia (right):
26. Close of Nursia bottle on conveyor belt as it receives label
27. Close of bottles receiving Nursia label
31. Close of Father Martin scrolling through Nursia website
AP Television