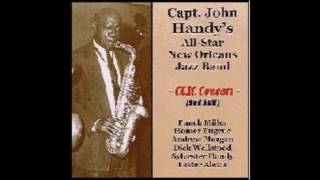 Captain John Handy (June 24, 1900 - January 12, 1971), was an American jazz alto saxophonist. Handy's style was rooted in New Orleans Jazz but also incorporated elements of R&B.
Captain John Handy on saxophone with Kid Sheik Colar on trumpet, Preservation Hall, 1965
Handy was born in Pass Christian, Mississippi. He played clarinet in New Orleans bands from the 1920s, including in his own Louisiana Shakers. He switched to alto saxophone in 1928, and was little-known outside of Louisiana until the 1960s, when he began playing frequently with Kid Sheik Cola and the Preservation Hall Jazz Band and recorded for GHB Records, RCA, and Jazz Crusade.

He is well known for playing in the December Band alongside Kid Thomas Valentine, Big Jim Robinson, Sammy Rimington, Bill Sinclair, Dick Griffith, "Mouldy" Dick Mccarthy and Sammy Pen. His solo on "Ice Cream" is well known in New Orleans Jazz. Another one of his cuts that is often reproduced is "Cap's Blues". This is one of the most raw blues solos ever played on the saxophone. He was one of the most versatile saxophone players to play Jazz. Scott Yanow called him "one of the top New Orleans musicians of the 1960s."

Disclaimer: I do not own the copyright to this recording. This video is for historical and educational purposes only.