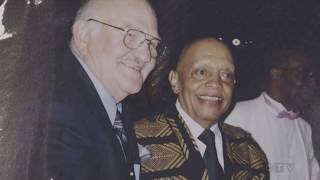 The two met in 1954 when John's vocal group The Gamsmen quartet from Niagara Falls, Canada travelled to New York City to seek their shot at stardom. By pure chance on their first day, they met the incomparable Dr. Donald Shirley, who hosted them and introduced them to the movers and shakers of the entertainment Industry. They were his personal guests at the Club Embers where Shirley was sharing a double bill with the great George Shearing. During this whirlwind time, they met the likes of Mabel Mercer, Jimmy Durante, Carmen McRae, Joe DiMaggio and his new wife Marilyn Monroe.

Dr. Shirley set them up with auditions at his record label Decca and with entertainment mogul, the infamous Joseph G. "Joe" Glaser of ABC Entertainment Booking.

In the 60's and 70's, Don visited Canada numerous times and John and his wife Anita travelled to see Don perform at various concerts throughout Canada and the U.S. Their friendship lasted from 1954 to 2013 when Dr. Shirley died of heart complications.

The film Green Book is based on Dr. Shirley's unlikely friendship with a working class Italian American bouncer Tony 'Lip' Vallelonga who served as Dr. Shirley's personal driver/body guard on a tour of venues through the 1960s Jim Crow American South. Dr. Shirley was closely involved with the civil rights movement, having both Dr. Martin Luther Jr. and Robert Kennedy as his personal friends.

Green Book is the winner of numerous Golden Globes and nominated for 5 Academy Award Oscars.