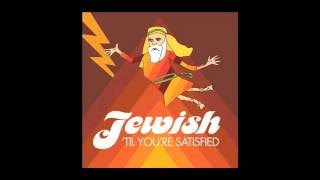 JEWISH 'TIL YOU'RE SATISFIED is the 6th album from the FunkeyMonkeys; the NYC-based funk supergroup for children and families. Created and produced by Dora the Explorer composer, Josh Sitron. It is the follow-up to 2004's JEWISH FUNKEYMONKEYS CD.

Done in the spirit of inclusion, you don't have to be Jewish to thoroughly enjoy JEWISH 'TIL YOU'RE SATISFIED. And if you are Jewish, you might not. 17 eclectic Jewish classics are remade in an irreverent and ecstatic mix of children's choruses dancing atop styles from electro-funk, to 70's AM gold bar mitzvah disco; and old testament ragtime spirituals. Though primarily aimed at children, there is stuff in here that only the adults can truly appreciate.

The original inspiration for Jewish FunkeyMonkeys came in 2000. While recording music for Dora the Explorer with Boots the Monkey (the then 8-year old, Harrison Chad), Mr.Sitron started spontaneously jamming on a funny and funky version of 'Ma Nish Tanah: the Passover Four Questions song' in the recording booth (while waiting in between takes of Dora dialogue: 'bridge, gate, big red hill'.)

Frustrated with the corporate constraints and agendas of big-time kids TV, Josh soon left and created the FunkeyMonkeys project. The 1st FunkeyMonkeys album, in which a chorus of children funk their way through children's classics remade in house, disco, funk, hip hop, techno, reggae, and jazzy styles. The album was a hit, so Josh decided to do a Jewish one. Enlisting a dozen kids from the Ramaz school on the Upper East Side of Manhattan, along with the incomparable Carey White on lead vocals, Jewish FunkeyMonkeys was recorded in the fall of 2002.

Repeated requests to hire the virtual 'band' for live performances, led to the creation of the FunkeyMonkeys live band / show, which boasts 6 members including a horn section which also counts membership in TV on the Radio, Antibalas, and the Davy Jones band.

Three albums of original, secular material from the FunkeyMonkeys, SING, DANCE & UNDERPANTS, TASTES LIKE CHICKEN, and MUSTACHE were created from 2002-2007. JEWISH 'TIL YOU'RE SATISFIED continues the madness.