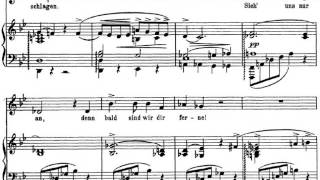 Kindertotenlieder (Songs on the Death of Children) is a song cycle for voice and orchestra, written between 1901-1904, with words from poems by Friedrich Rückert.

The original Kindertotenlieder were a group of 428 poems written by Rückert in 1833--34 in reaction to the illness (scarlet fever) and death of two of his children. Karen Painter, associate professor of musicology at the University of Minnesota, describes the poems thus: "Rückert's 428 poems on the death of children became singular, almost manic documents of the psychological endeavor to cope with such loss. In ever new variations Rückert's poems attempt a poetic resuscitation of the children that is punctuated by anguished outbursts. But above all the poems show a quiet acquiescence to fate and to a peaceful world of solace." Apparently, these poems were not intended for publication.

Mahler selected five of Rückert's poems to set as Lieder, which he composed between 1901 and 1904. The songs are written in Mahler's late-romantic idiom, and like the texts reflect a mixture of feelings: anguish, fantasy resuscitation of the children, resignation. The final song ends in a major key and a mood of transcendence. The cello melody in the postlude to "In diesem Wetter, in diesem Braus" (mm. 129 - 133) alludes to the first subject of the finale of Mahler's Third Symphony (1895/1896), a movement titled "What love tells me" ("Was mir die Liebe erzählt"). "Musically, then, this is the last word of the Kindertotenlieder: that death is powerful, yet love is even stronger."

The composer wrote, concerning the performance of the work, "these five songs are intended as one inseparate unit, and in performing them their continuity should not be interfered with".

The Kindertotenlieder were premiered in Vienna on 29 January 1905. Friedrich Weidemann, a leading baritone at the Vienna Court Opera, was the soloist, and the composer conducted.

The poignancy of the cycle is increased by the fact that four years after he wrote it, Mahler lost his daughter, Maria, aged four, to scarlet fever. He wrote to Guido Adler: "I placed myself in the situation that a child of mine had died. When I really lost my daughter, I could not have written these songs any more."