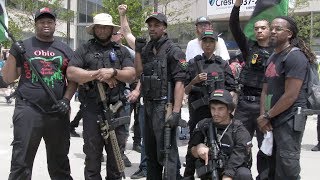 "If your opposition has a gun, you better have one too. That's the truth."

That was Jordan Telting, chairman of the Huey P Newton gun club who showed up as part of an armed formation with the Dayton chapter of the New Black Panther Party for Self Defense.

The group of about a dozen men and women came armed to counter a Ku Klux Klan rally in the city of Dayton. Approximately 650 individuals comprised a "Rainbow Coalition" mostly comprised of leftist groups countering the nine Klansmen who showed up.

With 350 police officers present, the New Black Panther Party explained to News2Share that they see the police as the threat, and siding with the Klan over the community.

"They don't treat us equally," one pointed out.

"We wanna protect all these people that's out here today," said Donald Dominic, who leads the Dayton chapter of the New Black Panther Party for Self Defense. "Exercising their constitutional right to stand against the Klan. Amen."

The Southern Poverty Law Center (SPLC) describes the group as "a bigoted, anti-white, antisemitic Black Nationalist group that preaches hate toward the LGBT and Jewish communities and holds beliefs rooted in the teachings of Nation of Islam."

NO REUSE WITHOUT PERMISSION Please contact Ford Fischer at [email protected] or call (573) 575-NEWS to license video. Photos and additional footage may be available upon request.

Special Thanks to Patreon Contributors Robert Caputo, and Lee Enochs