KZ Tandingan covers "Tadhana" (Up Dharma Down) on Wish 107.5 Bus 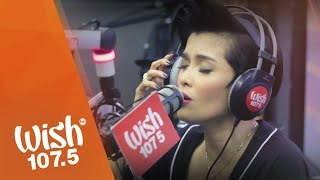 KZ Tandingan performs "Tadhana" as a tribute to her ultimate musical hero, Up Dharma Down (UDD).

During her Roadshow stint, the Soul Supreme shared her moving story of how UDD became one of her biggest music influences. She started singing as a child, but had to stop when she was in high school after suffering from a throat problem. She shared that she almost quit singing altogether because she can't hit high notes anymore. That was until her best friend made her listen to a song from an up-and-coming band that time -- which was UDD's hit song titled "Oo".

The band's amazing approach to music inspired her to return to what she loved doing the most -- and soon, she started performing again.

And her passion and hard work soon paid off. KZ's unique vocal stylings and prowess paved the way to her phenomenal stardom.

Di pa ba sapat ang sakit at lahat na hinding hindi ko ipararanas saýo
(Is it not enough that the pain and all, that I will never ever make you experience them)
Ibinubunyag ka ng iyong matang sumisigaw ng pag-sinta
(You are being divulged by your eyes that shouts of love)

Ikaw ang hantungan at bilang kanlungan mo
(You are my destination, and as your shelter)
Ako ang sasagip sa'yo
(I'll be the one to rescue you)

Saan nga ba patungo, nakayapak at nahihiwagaan
(Where am I headed, in bare feet, feeling an enchantment)
Ang bagyo ng tadhana ay dinadala ako sa init ng bisig mo
(The storms of fate, it carries me into the warmth of your arms)

Ba't di pa sabihin ang hindi mo maamin
(Why don't you now say the things [or feelings] that you can't admit)
Ipauubaya na lang ba 'to sa hangin
(Will you [it be] hand[ed] them over to [and carried by] the wind?)

Feel free to SHARE this video but DO NOT REUPLOAD. Thank you!