Laurie Anderson Interview: We are In Constant Panic Mode 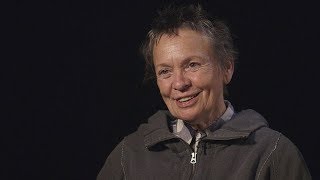 In this short video, the iconic multimedia artist Laurie Anderson speaks her mind about our changeable world today, and why we should stop panicking and being so territorial: “You cannot close your doors anymore, everyone’s banging on them and you’d better figure out what to do – and see the positive thing in that.”

One billion people are homeless, constantly moving around, Anderson says: “And these enormous shifts are very, very unsettling to people.” It’s equally overwhelming for those arriving and those already there, and we need to look at it, she finds, because it’s the way things are going. To Anderson, this blending of people is very exciting, and she compares it to the “real brew” of a New York port, but on a global scale. However, she believes that we are all in a “media panic mode,” constantly expecting something bad to happen, and advises that we “try to see these great surges and great changes in a mode that’s not panic.” What’s happening is inevitable, and we must try to see the good in it because fighting it and being angry won’t help: “Go with the flow, find a really good way to ride that.”

Laurie Anderson (b. 1947) is a legendary award-winning multimedia artist based in New York. Initially trained as a sculptor, she has worked with painting, music, multimedia shows, drawings, operas, electronic software, theatre, films and installations throughout her career. Anderson became widely known outside the art world with her single ‘O Superman’, which reached number two on the UK pop charts in 1981. She is considered a pioneer of electronic music and is praised for her unique spoken word albums and multimedia art pieces. Among her most recent work is the film ‘Heart of a Dog’ (2015). In 2017 under the name of ‘La Camera Insabbiata’, ‘Chalkroom’ won for ‘Best VR Experience’ at the Venice Film Festival. Anderson's visual work has been presented in major museums throughout the United States and Europe. From May 2017 Laurie Anderson’s ’Chalkroom’ is on view at the MASS MoCA, Massachusetts, USA. For more about Anderson see: www.laurieanderson.com/

Laurie Anderson was interviewed by Christian Lund at the Louisiana Museum of Modern Art in Denmark in connection with the exhibition ‘The Moon’ in September 2018.