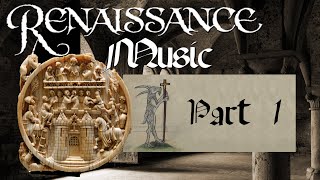 This album will bring you back to a simpler time in our history.
The Jolly Minstrels present minstrel tunes, songs, and dances of Middle Ages on authentic instruments.

Note: This video covers Side One of the record.
If you enjoy the video, please give me a thumbs-up or leave a comment.
Be sure to check out my other videos for more great music!

Note: Monitization is turned off for this video. (I do not get paid for any views or advertisements for this video.) This video is provided as a public service. Enjoy!

The Jaye Consort have here abandoned their viols (made by Henry Jaye, c. 1620) to play medieval music on reconstructed medieval instruments -- all of which are depicted on the cover. The result is a heterophony, not unlike an Arabian night-club band, but nothing has been added to the music apart from drones, divisions, and a variety of percussion.

01 The Song of the Ass
This is from a play given at Beauvais in the twelfth century and whilst it was sung a young girl representing the Virgin Mary, with a child in her arms rode an ass into the Cathedral and up to the altar.

02 Ductia
Little is known regarding the origin of this dance except that it probably dates from the thirteenth century.

03 English dance
Also from the thirteenth century, this piece is played on the medieval fiddle which is both larger in size and lower in pitch than the modern viola.

05 Saltarello
From the fourteenth century, this fine piece is played on the cornemuse, a variety of bagpipes.

06 Estampie
Written for, and played on the organ. It may be the earliest known example of keyboard music, and contains much hocket (hiccough) — a style of writing much favoured at the time. It was taken from the Robertsbridge manuscript of c.1325.

07 Li mans d'amer
This is a beautiful unaccompanied ballade by Adam de la Halle, from the thirteenth century.

08 Lamento di Tristan
A melody from the fourteenth century — to which we have added the long-necked lute with metal strings, and nakers, which resemble very small timpani.

09 Estampie
The main form of dance of the thirteenth century, incorporating the nasal-sounding rebec.

10 C'est la fin [an. trouvère]
A Trouvère song (virelai) in which the Breton bombardt, a little outdoor shawm will be heard.The words —"It is the end. No matter what is said, I must love".

11 Estampie
Like the preceding estampie, this is to be found in the famous "Sumer is icumen in" manuscript.

Do you have any experience with this songs on this album?
Are you a fan of classical music? Please leave a comment below!
Thank you.