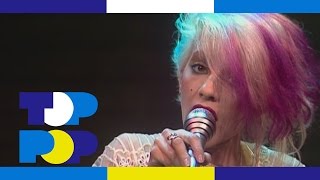 Missing Persons is an American rock band. The band was founded in 1980 in Los Angeles by guitarist Warren Cuccurullo, vocalist Dale Bozzio, and drummer Terry Bozzio. They later added bassist Patrick O'Hearn and keyboardist Chuck Wild. Dale's quirky voice and heavy makeup made the band a favorite on MTV in the early 1980s.

"Destination Unknown" is a song by American band Missing Persons. It was written by Dale Bozzio, Terry Bozzio, and Warren Cuccurullo with production by Ken Scott. Originally released on the band's self-titled EP (1980), the song was released as a single in September 1982 and appeared on their debut studio album Spring Session M (1982).

In the United States, it was a minor hit spending 13 weeks on the Billboard Hot 100 chart, narrowly missing the Top 40 and peaking at #42 in November 1982.

This song is used in Grand Theft Auto: Vice City Stories on Flash FM. The song is also played at the end of Season 2, episode 7, titled "Nothing Shattered," of the NetFlix series GLOW.

AVROTROS is a Dutch radio and television broadcaster, founded in 2014 from a merger of AVRO and TROS. From January 1st, 2014 the name of the merged broadcaster was used in joint programmes. AVRO was founded in 1923 as the Netherlands first public broadcaster. TROS started broadcasting in 1964. Toppop was a weekly AVRO pop program that was aired between 1970 and 1988.