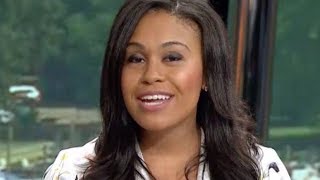 Double congratulations are in order for NBC anchor Meagan Fitzgerald!

On Saturday, June 1st, 2019, the NBC4 Washington weekend reporter took to Instagram to announce her engagement to longtime girlfriend Kelly Heath, just as the world rang in Pride Month. Captioning a gorgeous post from the happy couple's proposal, Fitzgerald wrote,

"Cheers to a lifetime with the love of my life and best friend. I love you so much! We're gettin' married!!!! It's been a long journey but worth the wait. Thank you for the way you love me. I said YES!!"

The post included a close-up snap showing off her beautiful engagement ring, which, according to Brides, is an emerald-cut.

However, what makes this story even more special is the way Fitzgerald revealed her engagement news at work the following day. According to AOL, the occasion marked the first time she spoke openly about her sexuality and her relationship with Heath on the air. The local news anchor notably used the opportunity and her televised platform to share a message of hope and encouragement with her LGBTQ+ viewers. She started by acknowledging how difficult it can be to be gay, lesbian, bisexual, or transgender.

She went on to directly address any boys, girls, men and women watching who may be struggling.

As NBC News reported, Fitzgerald, 33, and medical devices salesperson Heath, 30, met on a popular dating app back in 2017. According to the newscaster,

"She likes to joke that we met the 'old-fashioned way' on Tinder...Meeting her was surreal. I knew she was different from the beginning and even though it sounds cliché that she was the one…She's a beautiful person inside and out."

With a big smile on Sunday, June 2nd, Fitzgerald shared the deets on her future wife's proposal on TV.

The newly engaged pair celebrated with dinner at the Washington D.C. tapas restaurant Barcelona Wine Bar, which Fitzgerald called "a special place for [them]."

In addition to clearly marking a major milestone in Fitzgerald's personal life, the proposal announcement was also a doubly symbolic way to begin Pride Month which she noted on Twitter, saying,

"Grateful to have this platform to not only share my special news, but a message I wish I heard when I was younger. [Happy Pride]."

The importance and timing behind Fitzgerald's decision to publicly share the engagement news wasn't lost on her excited co-anchors, who shared their congrats on-air. Sharing her network's coverage of the happy occasion, the reporter later wrote on Instagram,

"I'm truly overwhelmed by the love and support. Thank you so much and thank you to [NBC News, NBC Washington, and NBC Out] for sharing our story. I'm grateful to work for a company that celebrates and appreciates diversity."

Just days before Fitzgerald and Heath's engagement news broke, the news anchor shared a sweet selfie of the pair alongside the simple caption "My love."

And now she's looking toward the future, tweeting on Tuesday, June 4,

Congratulations once again to Meagan Fitzgerald and Kelly Heath and a sincere thank you to the NBC News anchor for the reminder this Pride Month that love wins.