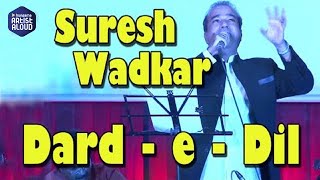 "Suresh Wadkar" performs live on the song "Dard E Dil" at the 2nd Music Mania event. Music Mania is the never before seen presentation of a talent selected through a talent hunt run on Artist Aloud and selected by Talat Aziz, Anup Jalota and Pankaj Udhas along with a headlining celebrity artist. Every event showcases a new genre and a new offering.
Music Mania is a club that allows people to become members to be able to get discounted tickets for an event and more greater discounts and surprises.

Suresh Ishwar Wadkar is an Indian playback singer. He performs in both Hindi and Marathi films.He has sung songs in some Bhojpuri films and in Konkani.

***************
Suresh Wadkar groomed for Indian classical music, he entered the Sur-Singar competition in 1976. Wadkar won the competition which was judged by composers from the Indian film industry including Jaidev. Jaidev later offered him the song "Seene Mein Jalan" in the film Gaman (released in 1978). He also performed in the film Paheli (released 1977).

At the time, Lata Mangeshkar was so impressed with his voice that she strongly recommended him to film personalities including Laxmikant-Pyarelal, Khayyam and Kalyanji-Anandji. Laxmikant-Pyarelal, impressed with his voice, soon recorded a duet with Lata "Chal Chameli Bagh Mein" for Krodhi (released in 1981). Soon after, he was given the opportunity to perform for songs in Hum Paanch, Pyaasa Sawan ("Megha re Megha Re") and above all, his turning point in films – Raj Kapoor's Prem Rog (released in 1982).after that Wadkar Sang many songs under R.K. Banner and he offenly gave his voice for Rishi Kapoor for Heena, Prem granth, and Rajeev Kapoor for Ram teri Ganga Maili he used to sing specially for Rishi kapoor in Numerous film Bol Radha Bol, Vijay, and other song. In 1996, Wadkar sang Channeache Rati among several other songs in Rajendra Talak's Konkani album Daryachya Deger with Asha Bhosle.

Music Mania is the brain child of Bina Aziz, wife of the Ghazal Maestro Talat Aziz in collaboration with Artist Aloud & Big FM 92.7. Also giving their blessings and support to this unique property is Anup Jalota and Pankaj Udhas.

*Artist Aloud is a platform for both, Independent music makers and fans of Independent music. We promote Musicians, Bands, Singers, Composers, Instrumentalists, etc. who create popular non film music and help them distribute their original music, enabling them reach out to their fans. Artist Aloud is where you can download the best music content in the quickest and the cheapest way.
We work with artists big and small and we put them in the spotlight with innovative music entertainment content such as TGIRF, New This Week, LaunchCast, RockStock, Music day and our trademark Webcerts. We are a dedicated team and we do all this because for us, it’s `Music First’.

Head to http://www.artistaloud.com/ to listen to some awesome original tracks from Independent artists.