Terry Clark & Trace Adkins - "After The Fire Is Gone" 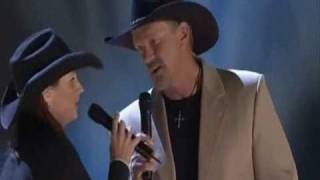 "After the Fire Is Gone" is a song written by L. E. White, and recorded by American country music artists Loretta Lynn and Conway Twitty as a duet. It was released in January 1971 as the only single from the LP We Only Make Believe. "After the Fire Is Gone" was the first number one on the U.S. country chart for Lynn and Twitty as a duo. It spent two weeks at number one and a total of 14 weeks on the chart. On the Billboard Hot 100, the single peaked at number 56.

In 1974, Willie Nelson and Tracy Nelson released a cover version which reached #17 on the country charts. Ricky Lynn Gregg released a version in 1994 from his album Get a Little Closer, but his version did not chart.

The song was recorded by Tanya Tucker on her 2010 album "My Turn." A duet version was recorded by Allison Moorer and Steve Earle on the 2010 tribute album to Loretta, "Coal Miner's Daughter."

Terri Lynn Clark (born August 5, 1968) is a Canadian country music artist who has had success in both Canada and the United States. Signed to Mercury Records in 1995, she released her self-titled debut that year. Both it and its two follow-ups, 1996's Just the Same and 1998's How I Feel, were certified platinum in both countries, and produced several Top Ten country hits.

Her fourth album, 2000's Fearless, though certified gold in Canada, was not as successful in the U.S., producing no Top 10 hits. Pain to Kill from 2003 restored her chart momentum in the U.S. with "I Just Wanna Be Mad" and "I Wanna Do It All", while a 2004 greatest hits album produced the Number One "Girls Lie Too". A non-album single, "The World Needs a Drink", and the 2005 album Life Goes On were her last releases for Mercury before she signed to BNA Records in 2007. There, she released the singles "Dirty Girl" and "In My Next Life". Although the latter went to Number One in Canada, she has not released an album for BNA.

Clark's albums have accounted for more than twenty singles, including six Number Ones. "If I Were You", "Poor Poor Pitiful Me",[1] "Emotional Girl" and "In My Next Life" all topped the country charts in Canada, "Girls Lie

Tracy Darrell Adkins (born January 13, 1962) is an American country singer and actor. In 1998, Adkins appeared on the PBS music program Austin City Limits (season 23). Adkins made his debut in 1996 with the album Dreamin' Out Loud, released on Capitol Records Nashville. Since then, Adkins has released ten more studio albums and two Greatest Hits compilations. In addition, he has charted more than 20 singles on the Billboard country music charts, including the Number One hits "(This Ain't) No Thinkin' Thing", "Ladies Love Country Boys", and "You're Gonna Miss This", which peaked in 1997, 2007, and 2008, respectively.

Lyrics in the comments box