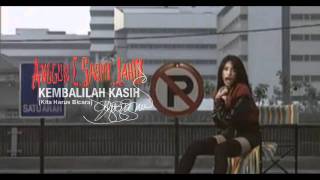 So here it is, one of Anggun's previously hard to find music videos. It is from Anggun's last album before embarking on an international career. Anggun C. Sasmi... Lah!!! is the fourth studio album by Anggun and it was self-produced and released in 1993 on her own label, Bali Cipta Records. This music video is NOT the one directed by Indonesian actress Ria Irawan.

The album itself was released in two formats, cassette tape and compact disc. I happen to have 2 copies of this album in cassette tape, however the CD copy has pretty much disappeared from the face of the earth :(. I am looking for it, I hope one day I get it and when I do I would put it on a pedestal LOL.

Sorry for the permanent tags on the video. I had to do that because i didn't like the watermark that was previously on the video, so I blurred the watermark and covered it with the "Anggun C. Sasmi...Lah" Logo and the song title below that. The music video is originally 4:3 but I made it widescreen cause it looks better on my tv like that, plus the black and white scenes were shot in widescreen anyways.

The audio was remastered by me, I tried to make it sound as clear as possible. Many of you may realize that the song has a different duration from the original Album Version. If I'm not wrong this "video edit" has a whole verse taken out. The cassette version is also different from the Album version cause it fades out.

I hope you guys enjoy this music video, Anggun doesn't look too different now. I really love this song, it's been covered by Indonesian bands GIGI and Deva but nothing beats the original ;). Anggun also performed this on her 2011 Indonesian Solo Tour "Konser Kilau Anggun", I saw her, she was amazing and I hope she releases a dvd for it :(

Please Don't Reupload. Credit me if you wanna post it else where. It took effort and time to re-edit and remaster the songs so please understand what I mean. ;)