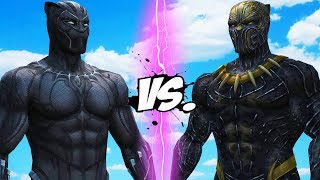 T'Challa is a Wakandan politician, the current ruler of Wakanda, and the current holder of the Black Panther mantle. After his father was killed in a bombing attack orchestrated by Helmut Zemo, the new monarch set out to kill the Winter Soldier, whom was widely believed to be responsible for the attack. After being drawn into the Avengers Civil War and siding with Iron Man, T'Challa learned the truth about Zemo's deception and decided to help the Winter Soldier by granting him asylum in Wakanda.

Erik Stevens (born N'Jadaka) was a former American black-ops soldier of Wakandan origin through his father, Prince N'Jobu. His savagery while serving in the US black-ops earned him the nickname Erik Killmonger. Years after T'Chaka killed his father for betraying Wakanda, Killmonger then planned to forcibly dethrone T'Challa in order to accomplish his father's plan to seize control of the world with Wakanda's technology and stop what they perceived to be the oppression of people of African descent by the world.

Be sure to check out other epic battles between superheroes:

★ Black Panther vs The Flash
https://youtu.be/557Odmj0hHY