Can You Beat Lonesome Road Without Taking Any Damage? 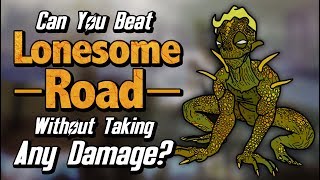 Can You Beat Fallout New Vegas’s Lonesome Road Without Taking Any Damage? (in text form)

I then left Doc Mitchell’s house, made The Reunion my active quest to have a waypoint, and made my way to the Canyon Wreckage. I stood there for a moment, thinking about what kind of nightmarish [boop]storm I was about to walk into, I p[rear]ed through the wreckage, and took my first look at The Divide. I found the Hopeville Silo Bunker Entrance, tried to open the blast doors, failed, looted a few ammo crates, found an Arc Welder, and activated ED-E who has an [rear]ortment of memories inside him which sometimes inhibit his ability to be useful. I used him to activate an Automated Commissary that unfortunately didn’t have any useful weapons, but it did have a [flip]-ton of ammo available, so I sold my armor and healing items to buy some ammo that I thought might find a use for some time down the road, as well as some that I could use now.

After ED-E activated the blast doors and I restored the power, I saw a few of ED-E’s brothers, wandered around the missile for a bit, and got into combat for the first time. You know you’re in for a bad time when the first enemy you find is a Sentry Bot. I used quote a few rifle grenades on it then let ED-E do the rest of the work for me. A few Marked Men and a dead Sentry Bot were just up ahead. Something pinned a Marked Man to a wall by pushing a steel rod through both the Marked Man and the steel wall it was pinned too. Another bad sign.

I managed to take out another Sentry Bot all by myself, I p[rear]ed through some sort of an office, and Opened the Silo’s Bunker Doors. That was a mistake, because 4 or 5 Sentry Bots came online and dispatched of ED-E in seconds. I may or may not have had a hand in that by blasting him with a grenade or two. Either way, ED-E was down and out and I found myself trapped in a corner with multiple Sentry Bots between me and the rest of the Divide. I can guarantee that if it weren’t for that grenade rifle, there was no way I’d have been able to get p[rear]ed them. I was able to pop out from behind cover, shoot a grenade, and retreat before any of them could hit me. There were still two turrets left, and I had already gone through almost half of my grenades, but the Sentry Bots had been returned to their endless slumber.
I used the same tactic I used in my Companion Only video by backtracking through the Silo and exiting through the entrance to revive ED-E. The turrets were less of a threat than I thought they’d be, I looted all the mechanical corpses, went outside to Hopeville, and had a conversation with Ulysses for the the first time. He provided me with some backstory about myself, spoke dramatically about things that have transpired and events still have yet to take place, and explained that the Divide may prove to be the end of the line for me.

The small upside about Lonesome Road is that it’s fairly linear, your objective is pretty much to just put through the Divide by whatever means necessary until you reach Ulysses. The 2nd part of that linear path takes us through Hopeville, where there are quite a few Marked Men. They have high-powered weaponry and are pretty accurate, not that the weapons they carry matter all that much. It doesn’t matter if it’s an anti-material rifle or a nerf gun, the bullets [incapacitate] me instantly.