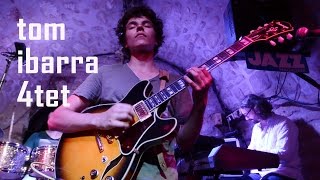 Cause we've ended as lovers (composed by Stevie Wonder) - Jeff Beck cover. Tom broke the B string of his guitar on his previous composition called "The Notes"... He had to change the guitar string on stage. In the meantime, the band began to play…

"Cause we've ended as lovers" was composed by Stevie Wonder and released in 1974 on ex-wife album "Stevie Wonder presents Syreeta" (Motown). The song was covered by Jeff Beck as an instrumental version (dedicated to guitarist Roy Buchanan and thanks to Stevie) on his album "Blow by Blow" (Epic Records) recorded in October 1974 and released in 1975. It is said that Stevie gave this song to Jeff because of "Superstition" which was co-written with and for Beck in 1972: after finishing the song, Wonder decided that he would allow Beck to release his version of the song first. At last, "Superstition" was released first by Stevie in 1972 as the "Talking Book" album lead single.