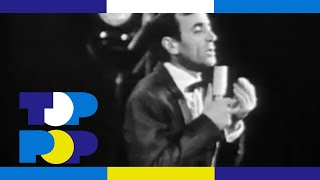 Today Charles Aznavour passed away. To honour him we place this video, one of his greatest hits, on the TopPop channel.
May he rest in peace.

Charles Aznavour, pseudonym van Chahnour Varinag Aznavourian (Armenian: Շահնուր Վաղինակ Ազնավուրյան), (Paris, 22 May 1924 - Paris, 1 October 2018) was a French singer-songwriter and actor from Armenian descent.
Today he passed away, 94 years old. He is considered one of the greatest chansonniers. His seventy-year career produced some 294 albums and 1.400 songs, including the classics 'La Bohème' and 'She'.
Aznavour scored hits in the sixties and seventies in the Netherlands such as 'For me ... formidable', 'Yesterday When I Was Young', 'The Old Fashioned Way', 'She' and 'Mes emmerdes'. Despite his high age, Aznavour still performed, for example in early March in an almost sold out AFAS Live in Amsterdam.
The singer was confronted more often with his fragile, physical condition in the past six months. For example, he was admitted to a hospital in St. Petersburg in April because he became unwell during a rehearsal.

This video is part of the AVRO TV program 'Club Domino', a music program of the 1960's in which one guest was at the center of each episode. The series of musical performences was presented by Denise Maes in the context of AVRO's "Club des Vedettes".
In this episode a gala show in honor of the 40th anniversary of the AVRO was broadcast with Charles Aznavour. Musical accompaniment by a band consisting of Henri Gérard, François Guin, Pierre Simonain, Pierre Urbain and André Biressi.
See: https://www.youtube.com/watch?v=iDHfBpFuJf0

AVROTROS is a Dutch radio and television broadcaster, founded in 2014 from a merger of AVRO and TROS. From January 1st, 2014 the name of the merged broadcaster was used in joint programmes. AVRO was founded in 1923 as the Netherlands first public broadcaster. TROS started broadcasting in 1964. Toppop was a weekly AVRO pop program that was aired between 1970 and 1988.