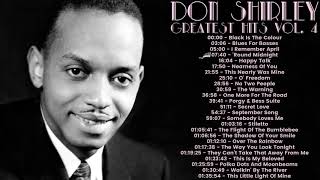 Shirley, who married once and divorced, never had children. A scene in Green Book shows him handcuffed in a YMCA shower after relations with another man, prompting questions about his sexuality, though he kept this aspect of his life private. The musician was often called "Dr. Shirley," which, according to a November 2018 New York Times article, may have been due to his honorary degrees, as he never attended graduate school.

However, other sources state that Shirley received doctorates in music, liturgical arts and psychology, and briefly pursued a career as a psychologist in the early 1950s. Forced to curtail his output after developing tendinitis in his right hand in the early 1970s, Shirley disappeared from the public eye by the end of the decade. Shirley died from complications of heart disease at his home in New York City, above Carnegie Hall, on April 6, 2013. He was 86 years old.