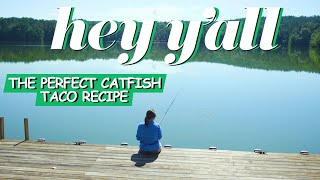 Ivy visits the lake to catch some catfish for her catfish taco recipe. She has fished since she was a kid. Watch her tie a hook and share a bit of her fishing knowledge. She prefers worms and hot dogs for bait. She also confesses that she used to eat Vienna sausages when she was a kid.

Fishing is about 80% luck but she doesn’t have any today. It’s too hot and the fish are hardly biting. Not to be defeated by her catfish taco recipe, she returns home with locally farm raised catfish.

She marinates the catfish in buttermilk and hot sauce, frying them in peanut oil. Once the fish are fried, she prepares the spicy slaw to top the tacos. The slaw includes pineapple, radishes, and jalapeños from her garden. She makes the slaw's vinaigrette and talks about her favorite kitchen tool, the microplane.

These tacos are perfect!

Traditional does not mean stuffy in the home of Southern Living test kitchen pro Ivy Odom. This Georgia-bred millennial can fish, throw a mean SEC tailgate, and even knows her way around a pigsty. In each episode, Ivy shares stories, customs, and recipes from growing up in the Deep South but always adds her own modern spin.

In 1966, Southern Living was created to highlight the beauty and culture of the growing South. In the decades since its inception, Southern Living, published monthly, has become one of the largest lifestyle magazines in the country. With characteristic Southern hospitality, Southern Living is committed to sharing the region we love with our readers, no matter where they may live.