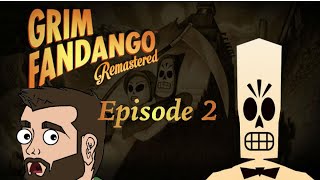 We make our way to the mass poisoning and pick up our premium ticket client in the next episode of this classic Lucasarts adventure!

Grim Fandango is a 1998 adventure game directed by Tim Schafer and developed and published by LucasArts for Microsoft Windows. It is the first adventure game by LucasArts to use 3D computer graphics overlaid on pre-rendered static backgrounds. As with other LucasArts adventure games, the player must converse with characters and examine, collect, and use objects to solve puzzles.

Grim Fandango is set in the Land of the Dead, through which recently departed souls, represented as calaca-like figures, travel before they reach their final destination. The story follows travel agent Manuel "Manny" Calavera as he attempts to save new arrival Mercedes "Meche" Colomar, a virtuous soul, on her journey. The game combines elements of the Aztec belief of afterlife with film noir style, with influences including The Maltese Falcon, On the Waterfront and Casablanca.

Grim Fandango received praise for its art design and direction. It was selected for several awards and is often listed as one of the greatest video games of all time. However, it was a commercial failure and contributed towards LucasArts' decision to end adventure game development and the decline of the adventure game genre.

In 2014, with help from Sony, Schafer's studio Double Fine Productions acquired the Grim Fandango license following Disney's acquisition and closure of LucasArts as a video game developer the previous year. In January 2015, Double Fine released a remastered version of the game, featuring improved character graphics, controls (including point and click), an orchestrated score, and directors' commentary. It was initially released for Windows, PlayStation 4, PlayStation Vita, OS X, and Linux platforms. Mobile versions for Android and iOS devices were released in May 2015. A Nintendo Switch port of the remastered version was also released in November 2018. An Xbox One version is scheduled for release in 2020.