I'm With Her - "Pangaea" [Official Audio] 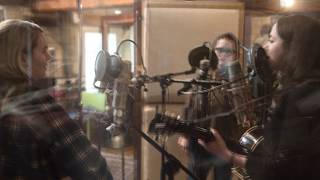 Uploader: I'm With Her

"Pangaea" is from the full-length, debut album, See You Around, from I'm With Her.
CD/Vinyl: http://found.ee/IWHSeeYouAround

The album was written in Los Angeles and Vermont and recorded at Real World Studios in a village near Bath, England. Co-produced by Ethan Johns and the band, See You Around delivers a warmly textured sound that proves both fresh and timeless.
This photo was taken during the recording of the album by York Tillyer.

What’s left when the ground cracks
And the sky’s black?

I’m an old fisherman
Throw out my line, I’ll pull you in
Drive my boat, drive my hook
Pull it out and throw you back into the deep end
Oh, it’s a lonely life

What’s left when the ground cracks
And the sky’s black?
Where will you land?

In a game of pieces baby
What’s your strategy?
Try your best, connect to me
But the ocean is wider than you think
In a continental jigsaw