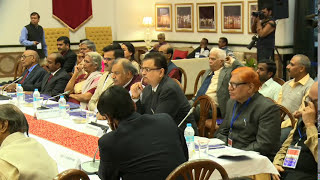 Speaking on the occasion, the President said that hewould like to pay tribute to all Indologists and scholars of Indian history, art and culture, science and philosophy the world over. They have, over the centuries, contributed to the understanding, propagation and promotion of the Indian knowledge system in countries far and wide.

The President conferred the first ‘Distinguished Indologist’ Award on Prof. Emeritus Heinrich Freiherr Von Stietencron of the Federal Republic of Germany. The President said that Prof. Stietencron’s work has added quality and substance to Indological studies and will go a long way in encouraging future efforts in this direction.

The President said Indology is the pursuit of a major component of human knowledge; it is the understanding of the evolution of human civilization and a science for the diagnosis and mitigation of the complexities of human life. Ancient Indians had left no stream of human consciousness unexplored - whether it was deeply delving into religion and philosophy or cracking the medicinal secrets of food. They studied, in fascinating detail, and wrote very succinctly, incredibly profound treatises on medical science, state craft, law, social science, metallurgy, language, grammar and aesthetics. Kautilya’sArthashastrais a comprehensive discourse on statecraft.Manusmritiis a legal text studied most widely. Nourishment of body through healthy food received equal attention andPakshastra(cooking) became a highly evolved subject.

The President said that he would also like to see more Indology in the academic collaborations between India and her foreign partners. That will not only add new dimensions to the bilateral discourse of India with these friendly countries, but will also create yet another layer of co-operation and mutual understanding.

The President said the popularity of Indology lies in its wide scope and capacity to reveal solutions for all possible questions that the human mind may contemplate. In ancient India, society accorded great value to novel thought. It must be recognised that India’s ancient traditions, to survive and grow, did not hesitate to selectively embrace all that is good in modernism. Her history remains alive and vibrant in the thoughts, actions, customs and rituals of her people. Modernity, in all its manifestations is equally welcome here.

The President said we are, today, witnessing events without precedent: when the world is struggling to deal with the worst impulses of intolerance and hatred that mankind has ever witnessed. At such a time, there can be no better recourse than to remind ourselves of the high values, written and unwrittensamskaras, duties and the way of life that is the essence of India. This is the time to reinforce the civilizational values that bind together the complex diversity of modern-day India and promote them among our people and the world.

The President said that he did not intend this assembly to excessively dwell on ancient times or merely fill us with nostalgia about India’s grand past. Instead, he anticipated that their scholastic interactions, while firmly anchoring today’s India in her glorious history – will illuminate the logical path to her destined greatness. He expressed confidence that the deliberations over the next three days will highlight the manner in which pluralism and multi-culturalism are at the very core of the Indian psyche.They will surely make an important contribution to our existing body of knowledge in the area of Indology.