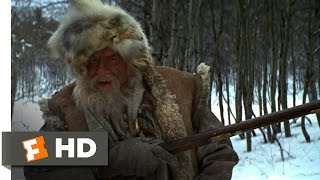 CLIP DESCRIPTION:
Jeremiah Johnson (Robert Redford) meets a fur-trapper, Bear Claw (Will Geer), who asks him if he can skin a grizzly bear.

FILM DESCRIPTION:
Years before Kevin Costner danced with wolves, Robert Redford headed to the mountains to escape civilization in Sydney Pollack's wilderness western. Around 1850, ex-soldier Johnson (Redford) decides that he would rather live alone as a mountain man in Colorado than deal with society's constraints. After a series of setbacks, he meets grizzled mountain veteran Bear Claws (Will Geer), who teaches him how to survive. Jeremiah strives to live as peaceably as possible in the rugged environment, trading with the native Crow tribe, adopting a boy (Josh Albee) after his family is massacred, and even marrying the daughter (Delle Bolton) of a Flathead chief in order to avoid confrontation. He settles into a mountain home with his family, but the U.S. cavalry, complete with a puritanical Reverend, interrupt the idyll to compel Jeremiah to lead them over the mountains and through a Crow burial ground to rescue white settlers. After the Crow kill his family in retaliation, Jeremiah's frenzied moment of payback precipitates a long-running vendetta, turning him into a legendary Indian killer at the expense of his original ideals, on the way to a final moment of grace. Spectacularly shot on location in Utah, the film captures both the appeal and the challenge of the landscape that Jeremiah chooses over civilization. With an unglamorous performance by Redford and a story that questioned white colonialism while mythologizing the man of nature, Jeremiah Johnson appealed to its 1972 audience and became one of the biggest hits of the year. Wavering between heroicizing Jeremiah for surviving and damning him for killing, Jeremiah Johnson took its place among the Vietnam-era cycle of critical westerns, like Arthur Penn's Little Big Man (1970) and Robert Altman's McCabe and Mrs. Miller (1971), that condemned civilization for corrupting the wilderness and preventing individuals from going pacifistically native.

WHO ARE WE?
The MOVIECLIPS channel is the largest collection of licensed movie clips on the web. Here you will find unforgettable moments, scenes and lines from all your favorite films. Made by movie fans, for movie fans.