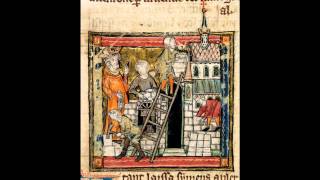 "The Crusades were a series of wars begun at the instigation of Pope Urban II in 1095 and ostensibly fought to 'free' Jerusalem from the Muslim 'infidels'. These expeditions involved all of Christian Europe. The nobility of each nation and their armies journeyed to Jerusalem four times between 1096 and ca. 1250, slaughtering not only Muslims and Jews but also local Christians, and sacking Constantinople, the seat of the Eastern Christian Empire, along the way. The promised rewards for the Christian armies were twofold: spiritual salvation from the Pope and riches from the pillage of the cities between Constantinople and Jerusalem.
Between the twelfth and nineteenth centuries the true events of the Crusades were romanticised beyond recognition in the poetry of troubadours, trouvères, and minnesingers, in folklore and later novels. On this recording there are two examples of troubadour texts (written in langue d'oc), eight examples of trouvère (in early French), and one of minnesang (in early German), as well as various Latin texts. Some relate directly to the Crusades such as 'Pax in nomine Domini!' and 'Chevalier, mult estes guariz'. Most, however, are from the time of the Crusades rather than having any direct relation to them. A good example is 'Ja nus hons pris', attributed to Richard the Lion-Heart.
There are approximately sixty manuscripts surviving of troubadour and trouvère poetry. Only a small number of them contain musical notation, and it is not at all clear if this music is the work of poets themselves, their scribes, or the jongleurs and minstrels who performed the songs. This early notation, like that of Gregorian chant, provides the performer with only a series of pitches to be sung and no clear indication if a specific rhythmic values (if, indeed, any were intended). Hence the performer must decide, with the help of modern theories, whether or not to impose a specific rhythm on a given song, and though one performer's interpretation might be very different from another's, both could be equally valid. We know from contemporary pictorial and literary evidence which instruments were in use in the twelfth and thirteenth centuries. For strings, the early lute of four/five courses, played with a plectrum; the citole, which apparently employed metal strings, also played with a plectrum; the rebec, in various sizes and played with a bow; and the harp. For wind instruments, the simple wooden flute, the recorder, a simple form of bagpipe, and the early shawm. On this recording the crumhorn is used to simulate the sound of the bladder-pipe, a contemporary instrument. For percussion, the nakers(a small pair of kettle drums), tabor and a range of tuned bells. Ironically, the lute, shawm, and nakers had all been recently imported to Europe from the Middle East.
The performances heard here represent an attempt at solving some of the practical problems of recreating twelfth and thirteenth-century music and a desire to present as varied and useful an introduction to this repertoire as possible."

I do not own the rights to this song.