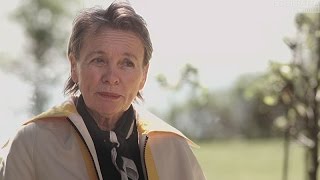 Listen to the story of how Laurie Anderson became the iconic multimedia artist she is today, why she prefers to keep things simple, and how she began telling stories as a child – and never stopped: “I try to make stories that really engage my mind.”

When Anderson started out as an artist, she was aware that you don’t necessarily need impressive or expensive gear in order to succeed: “I was trying to do something on the right scale – something that you can do yourself.” She began as a painter and sculptor and started playing the instruments she made while making little films, which she would show to a small group of artists. This enticed her to try to get her films out into a wider audience in the mid-1970s by doing “these little shows” at different venues.

“Switch ‘the’ to ‘a’ and the world changes.” Anderson argues that you begin to get a sense of the mystery of the world by a simple device such as switching articles. In continuation of this, she likes playing with language, e.g. by inventing the text software ‘Erst’, where sounds from instruments trigger language: “It’s made for the part of you that never speaks. That is always just watching and not voicing or putting things into words.” She consequently realized that she was able to use words in this way as “everyone’s so used to multitasking.” However, she hopes that we get slower – before we implode: “Slow for me is deeper.” Furthermore, Anderson doesn’t aim to make anyone feel better through storytelling, but rather to create stories that engage her mind: “Secretly, I do think that stories can cure you … but you have to find out what’s wrong first.”

Laurie Anderson (b. 1947) is an internationally renowned experimental performance artist, composer, musician and film director, based in New York. Initially trained as a sculptor, Anderson became widely known outside the art world with her single ‘O Superman’, which reached number two in the UK pop charts in 1981. She is considered a pioneer of electronic music and is praised for her unique spoken word albums and multimedia art pieces. Among her most recent work is the film ‘Heart of a Dog’ (2015). For more about Anderson see: www.laurieanderson.com/

Laurie Anderson was interviewed by Christian Lund at the Louisiana Museum of Modern Art, Denmark in May 2016.