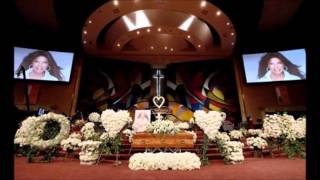 Natalie Cole, daughter of the late Nat King Cole, her father was the legendary baritone, passed away on December 31, 2015, one day before New Year of 2016. She had quite a successful career as a singer and songwriter. She passed away at Cedars-Sinai Medical Center in Los Angeles due to congestive heart failure and suffered from complications from her kidney transplant in 2009, acquiring a rare lung disease. She was 65 years old.

Her memorial service was held on Monday, January 11, 2016 at the West Angeles Church of God in Christ in Los Angeles, California, David Foster, Stevie Wonder, Smokey Robinson, Lionel Richie, Chaka Khan, Eddie Levert, Mary Wilson, Gladys Knight, Ledisi, Jesse Jackson, Angela Bassett, Denise Nicholas and Freda Payne were among the mourners at the funeral. After the funeral, she was buried in Forest Lawn Memorial Park in Glendale, California next to her parents Maria and Nat King Cole.

Nearly 5,000 of Cole's family and friends attended the private three-hour memorial service, with Richie, Foster and Robinson among those eulogizing the Grammy-winning singer, CBS Los Angeles reports. "I feel so blessed to have called you my friend, and my buddy, and many times my confidante," Robinson said. "You are so real and down-to-earth. Now I have to say you're so real and up to heaven."

"As much as I stood in awe of her artistry which ran so deep, when I think of her today, I realize that it's her friendship that I will miss the most," Foster said during his Cole tribute.

Cole's publicist also told ABC News that Wonder sang with the choir on one song, while Cole's son Robbie played drums during another performance. Cole will be buried next to her parents, Nat King Cole and Maria Cole, at Glendale's Forest Lawn Memorial Park, the same cemetery where Lemmy Kilmister was laid to rest on Saturday.

Natalie Cole had music in her blood — her father was the legendary baritone Nat King Cole. But over the course of her career, Cole, who died Thursday at age 65, proved herself to be a sterling performer who blended pop, rock, and soul influences into a refreshing mix, and her crystal-clear voice handled spunky tracks like "Sophisticated Lady (She's a Different Lady)" as deftly as it did the standards popularized by her father.

Cole's debut single is sunny and sassy, with bright horns and a joyous vocal performance that helped turn it into a rom-com staple. It won the 1976 Grammy for Best Female R&B Vocal Performance — the first time the award, which was established in 1968, didn't go to Aretha Franklin. Cole won the Best New Artist Grammy the same year.