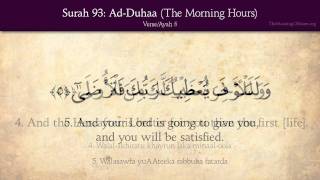 Uploader: The Meaning Of Islam

Introduction
Although there is some debate amongst scholars, this surah in often considered to be the second revealed to Prophet Muhammad. After the first surah (al-Alaq, surah 96) was received, there was a period of silence in which no further messages were revealed. During this time, the new Prophet wondered if he had somehow displeased God, who it seemed for a while was no longer sending down His message.
This surah broke that silence, and reassured Prophet Muhammad that all will be understood in time. The image of the morning (ad-Dhuha) is the first word of the surah, and can be understood as symbolizing Prophet Muhammad's "new day" as the Messenger of God, as well as the "dawn" of the new way of life that would become Islam. After this surah, the visitations of Gabriel with the words of the Qur'an would come to Prophet Muhammad regularly until his death.
Because of subject matter, length, style, and placement in the Qur'an, this surah is often coupled with Surah Al-Inshirah (Surah 94). They are generally considered to have be revealed around the same time.

**Note on the Arabic text**
While every effort has been made for the Arabic text to be correct, it has been copied from Quran.com's text and therefore some letters might look different due to the font change. I recommend for accurate Arabic letters you refer to Quran.com.