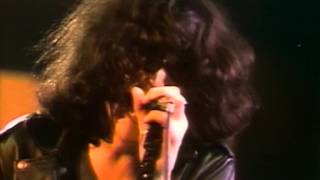 The Ramones were an American punk rock band that formed in the New York City neighborhood of Forest Hills, Queens, in 1974. They are often cited as the first band to define the punk rock sound. Despite achieving only limited commercial success, the band was vastly influential in both the United States and the United Kingdom.

Recognition of the band's importance built over the years, and they are now mentioned in many assessments of all-time great rock music, such as number 26 in the Rolling Stone magazine list of the "100 Greatest Artists of All Time" and number 17 in VH1's "100 Greatest Artists of Hard Rock". In 2002, the Ramones were ranked the second-greatest band of all time by Spin magazine, trailing only the Beatles. On March 18, 2002, the original four members and Tommy's replacement on drums, Marky Ramone, were inducted into the Rock and Roll Hall of Fame on their first year of eligibility, though Joey had died by then. In 2011, the group was awarded a Grammy Lifetime Achievement Award.