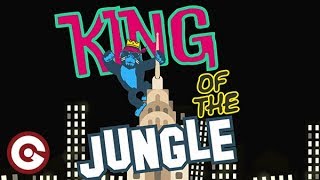 SHANGUY - King Of The Jungle - Out Now!
Add to your collection: http://open.spotify.com/album/6EO1KBzQ0mrhOVZLkh6mcO

Listen to more songs like this with our playlist!
Apple Music: https://itunes.apple.com/it/curator/ego/1405705875
Spotify: http://spoti.fi/2qnkdCG

Shanguy was born from a collaboration between italian dj NRD1 and indie/pop singers Eon Melka and Frank-O, that started on a whim in 2017. “La Louze”, their debut single, literally conquered Europe, reaching #1 iTunes Russia, #1 France, #1 Poland, Top 5 Italy, Top 50 Shazam World, #10 Shazam Dance World, #1 Shazam Future Hits Italy and Spotify Viral charts in France, Poland Italy and Norway.
The second official single "King Of The Jungle" represents an innovative step forward in the sound of the collective, that keeps the same style in the drop but tells now an opposite perspective to the losing spirit of "La Louze", with a greater presence of English lyrics alternated with French. "King Of The Jungle" sung by a choir of children is a hook that immediately sticks in your mind and ears like an unwanted guest who refuses to leave (but you love him anyways).
"So you wanna be king of the jungle?"