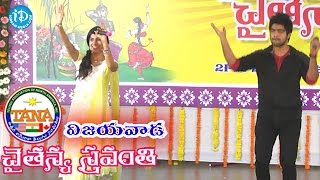 School and college students enthralled the audience with their performances. The students presented dance forms of various States in classical and semi-classical style. Folk dances like Lambada by students from Guntur, and a classical dance on Vrindavana theme were a few to mention.

The dance depicted the multi-dimensional aspects of Krishna including the kaliya mardana. In yet another interesting portrayal, the important events in Indian independence movement evoked patriotic sentiments.

A blend of yoga and dance was a major attraction. The students of VMR Municipal School in the city were at their best as they showcased different asanas laced with dance postures. Impressed by their performance, Friends Foundation announced a cash reward of Rs. 25,000 to five students of the group. A musical concert by singers Prudhvi Chandra, Sravana Bhargavi and Revanth was among other highlights.

Venkat from Proddutur in Kadapa district demonstrated his skills in lip-reading, singing and dance. He sang songs based on clues given in tunes by his father. The father-son duo entertained the crowd by singing and humming. TANA gave him special slot with a view to encourage him.