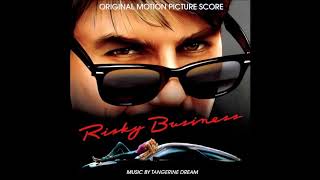 [Synth/Ambient/Electronic/Orchestration/Score/OST] "Time of your life, huh kid?" Here is the complete expanded film score to the classic Paul Brickman film that put Tom Cruise on the map, the one and only "Risky Business", all of which is composed by the legendary synth wave group Tangerine Dream. This video brings together all the score material composed for the film including the rare unreleased material that isn't available for public purchase. All of which has been exclusively enhanced & remastered by my brother Andy Morales. Let me begin by saying that I absolutely LOVE this score; It truly elevates the film's artistic visuals and stylistic approaches. However, it is truly a shame that only 5 tracks from this film have been released when they were included on the soundtrack album from 1984 by Virgin Records. Look no further as this video brings you a grand total of 26 (most of which are unreleased making this the definitive score album). Risky Business is a 1983 American teen coming-of-age comedy film that was written and directed by Paul Brickman (in his directorial debut) and stars Tom Cruise as Joel Goodson and Rebecca De Mornay as Lana. It is widely known as Cruise's breakout film (as it features the iconic Bob Seger - "Old Time Rock and Roll" living room sequence), Risky Business was a critical and commercial success, grossing more than $63 million against a $6.2 million budget. Tangerine Dream is a German electronic music band founded in 1967 by Edgar Froese. The group has seen many personnel changes over the years, with Froese having been the only continuous member up until his death in January of 2015. The best-known lineup of the group was its mid-'70s era of Edgar Froese, Christopher Franke, Peter Baumann and Johannes Schmoelling. They are considered pioneers of the early days of electronic music and has scored upwards of 60 films which include (but not limited to) Sorcerer, Thief, The Keep, Firestarter, Legend, Three O'Clock High, Near Dark, Shy People, Miracle Mile, and of course Risky Business. Overall, Risky Business redefined synth scores for the 80's; With tracks like "The Dream Is Always The Same" (Track 1) & "Love On A Real Train" (Track 18, 19, & 20) being similar to something reminiscent of Netflix's "Stranger Things" it's no surprise that this score has helped shape and influence many future synth composers of the following decades. This complete OST expanded soundtrack score is unreleased and has no distribution label '83.

-TO ALL VIEWERS, FEEL FREE TO THANK MY BROTHER (ANDY MORALES) FOR REMASTERING THESE TRACKS IN THE COMMENTS AS HE PUT A LOT OF HEART & SOUL INTO FINALLY GIVING YOU GUYS THIS EXPANDED ALBUM IN AMAZING QUALITY.

**I can assure you that this video is (and probably always will be) the CLOSEST THING you will get to an official expanded soundtrack score release. Also noting that very few tracks in this video have some slight sound effects but are near perfect, enjoy!**

I do Not own anything

INFRINGEMENT OF COPYRIGHT IS NOT INTENDED!

Under Section 107 of the Copyright Act: "§ 107. Limitations on exclusive rights: Fair use40
Notwithstanding the provisions of sections 106 and 106A, the fair use of a copyrighted work, including such use by reproduction in copies or phonorecords or by any other means specified by that section, for purposes such as criticism, comment, news reporting, teaching (including multiple copies for classroom use), scholarship, or research, is not an infringement of copyright. "

Therefore, "allowance is made for "fair use" for purposes such as criticism, comment, news reporting, teaching, scholarship, and research."