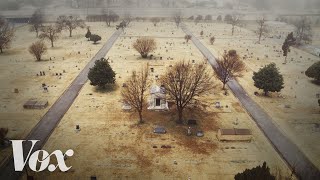 White mobs destroyed "Black Wall Street" in 1921. But where are the victims' bodies?

Nearly 100 years ago, a white mob destroyed an American neighborhood called “Black Wall Street,” murdering an estimated 300 people in Tulsa, Oklahoma. That incident — known as the 1921 Tulsa Race Massacre — has been largely left out of US history books. Today, a century later, the city still has a lot of questions. For one, where are the bodies of the victims? As the city's mayor re-opens the search for mass graves, we take a look at what happened back in 1921…and why finding these graves still matters to the people of Tulsa.

For more reading, check out the links below:

Vox’s reporting on an eyewitness account of the horrific attack: https://www.vox.com/2016/6/1/11827994/tulsa-race-massacre-black-wall-street

The Washington Post’s in-depth story on the massacre and the current challenges of gentrification: https://www.washingtonpost.com/news/local/wp/2018/09/28/feature/they-was-killing-black-people/

And to take a look through more digitized photos, audio, and documents from 1921, check out the Tulsa Historical Society’s collection: https://www.tulsahistory.org/exhibit/1921-tulsa-race-massacre/

Vox.com is a news website that helps you cut through the noise and understand what's really driving the events in the headlines. Check out http://www.vox.com.