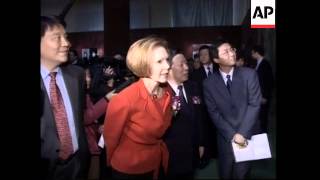 An exhibition commemorating the landmark visit to China of former United States President Richard Nixon opened in Beijing on Wednesday, in a further sign of improving Sino-American relations.

The exhibition, entitled 'Journeys to Peace and Cooperation', marks the 30th anniversary this year of Nixon setting foot on Chinese soil, an event which heralded a new era of diplomatic ties between Washington and Beijing.

00:02 Thirty years ago, the then U.S. President Richard Nixon made a landmark visit to China.

00:07 His 1972 tour amounted to his finest Foreign Policy decision.

00:12 Now an exhibition has opened in the Chinese capital, Beijing, to commemorate Nixon's efforts.

She's glad her father had a chance to see the transformations that have taken place in China since the '70s.

SOUNDBITE (English) Julie Nixon Eisenhower, daughter of former US President Richard Nixon
"He came back six times - the last time was just a few years before his death - and he saw the tremendous changes (in China)."

00:52 Nixon's efforts led to greater understanding between Washington and Beijing.

Retired Chinese diplomat Mr Zhang says this understanding, and common interests shared by the two countries, mean that any differences that do exist can now be overcome.

The exhibition, called 'Journeys to Peace and Cooperation' will transfer in January to the Nixon Library and Birthplace in California.