Why I Left the Left 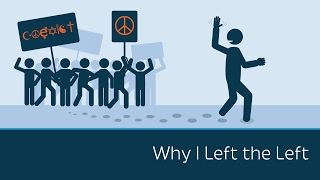 Dave Rubin of The Rubin Report used to be a big progressive. He even had a show with The Young Turks! But now he's not a progressive. He has left the left. Why? Dave Rubin shares his story.
Donate today to PragerU! http://l.prageru.com/2ylo1Yt

Have you taken the pledge for school choice? Click here! http://www.schoolchoicenow.com

Do you believe in free speech?

Do you believe that people should be judged by their character, not their skin color?

Do you believe in freedom of religion?

If you believe these things, you’re probably not a progressive. You might think you’re a progressive. I used to think I was. My show, “The Rubin Report,” was originally part of the progressive “Young Turks” network.

Progressives struck me as liberals, but louder. Progressives were the nice guys; they looked out for the little guy; they cared about women and minorities; they embraced change.

In short, who wouldn’t want to be a progressive?

But over the last couple years, the meaning of the word “progressive” has changed.

Progressives used to say, “I may disagree with what you say, but I will fight to the death for your right to say it.” Not anymore.

All of this has led me to be believe that much of the left is no longer progressive, but regressive. This is one of the reasons I’ve spent so much time on my show talking about The Regressive Left.

This regressive ideology doesn’t judge people as individuals, but as a collective.

If you’re black, or female, or Muslim, or Hispanic, or a member of any other minority group, you’re judged differently than the most evil of all things: a white, Christian male. The Regressive Left ranks minority groups in a pecking order to compete in a kind of “Oppression Olympics”. Gold medal goes to the most offended.

Martin Luther King, Jr.’s dream that his children would be judged by their character and not their skin color was a liberal idea, but these days, it’s not a progressive ideal.

And what about religious freedom - the idea that no one else can tell you what you have to believe? Surely progressives still support that basic right.

Well, not so much.

I’m a married gay man, so you might think that I appreciate the government forcing a Christian baker or photographer or florist to act against their religion in order to cater, photograph or decorate my wedding. But you’d be wrong. A government that can force Christians to violate their conscience can force me to violate mine. If a baker won’t bake you a cake, find another baker; don’t demand that the state tell him what to do with his private business.

I’m pro-choice. But a government that can force a group of Catholic nuns - literally called the Little Sisters of the Poor - to violate their faith and pay for abortion-inducing birth control can force anyone to do anything.

Today's progressivism has become a faux-moral movement, hurling charges of racism, bigotry, xenophobia, homophobia, Islamophobia and a slew of other meaningless buzzwords at anyone they disagree with.

The battle of ideas has been replaced by a battle of feelings, and outrage has replaced honesty. Diversity reigns supreme – as long as it’s not that pesky diversity of thought.

For the complete script, visit https://www.prageru.com/videos/why-i-left-left