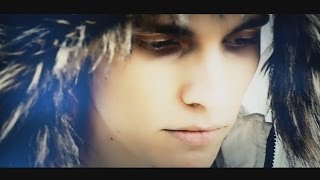 Ah! / You're a state, a disgrace and I ought to mention
that every hair on your head is a cry for attention
If you insist on that image then you deserve to be emasculated
so take a long hard look in the mirror and re-evaluate it

Finished? You really think you're more masculine?
Na man, you're insecure and full of it, take a laxative
I'm so sure of myself I'm practically reaching nirvana
you're that guy that says "no homo" after he eats a banana

I got that confidence that only comes with competence
but judging from your comments you've got some internal con-fuh-lict
Oh you gave your mate a hug? Yeah better tap his back
'cause you're scared people think you want to tap his back

You see me as a threat to gender identity
Acting like a guy with long hair is a felony
"You can't tell the girls from the boys, its a travesty!"
Oh no, now you might have to judge them on their personality

something's wrong if some big long strands of hair can shake your worldview
I rock this look and people like it, at least my type of girls do
and I don't want to get a ripped body, I like mine
if you call me stick thin / then that's a fine line

You wanna play it by your gender archetypes?
/ 'cause your logic is not entirely right
you hypocrite, I tried to be nice, but you're so ostensibly sexist
that I'm gonna have to prove on your terms who the best is

think; who has the more masculine confidence?
The man who anonymously calls a man that's androgynous
a fag cause it bothers him or the man with the gall to share
his character, thoughts and all his talent with all of us?

by your standards it's obvious I am the embodiment of
masculine dominance, but those standards are abhorrent
the fact is your cockiness here just masks your incompetence
and you cannot acknowledge it so you attack me ad hominem

/ your gender normative values are crumbling
like a big-ass cake, mmm-mmm, my tummy's rumbling
yum yum / tastes like bigoted humbling
I'm almost as happy to tell you that you're morally wrong as tumblr is

So let me set this straight just like my sexual preference
oh wait that simile just did it / what's next then?/ well I
guess that the next step now is to address that your best efforts doubtless will
never be as eloquent as anything I said and if you still don't get it lemme spell it out.

No-one benefits from being negative
about irrelevant things, that's the end of it.
It's pointless; If I didn't like someone's look
I'd accept it's their choice and just listen to what their message is

Reading my own fanfiction.

The real reason I have long hair.

I took a DNA test - here are the results.

Singing one syllable out-of-sync (THIS IS TRIPPY!)